The bullish market rally with which the week opened into has taken a new shape as the top cryptocurrencies including Bitcoin (BTC) and Ethereum (ETH) have surpassed previous All-time Highs (ATH) while setting new ones. Earlier today, Bitcoin attained a $64,758.25 price mark cementing its strides as one of the world’s leading assets.

Ethereum bulls also pushed the coins price north of $2,300, setting an ambitious ATH at $2,397.32. The complementary growth of both digital assets by more than 11% in the past week gives an insight into the purported push by the bulls to rediscover new highs.

The current price of Bitcoin at the time of writing is $64343.8, up 2.58% according to data from the CEX.IO price feed. Ongoing buying and selling actions in the market are wedging a weight upon which the price is looking to crumble but the extreme volatility seems to be in the favor of the bulls.

Despite the general health of the market as seen in the 4-hour BTC-USD chart above, the Bitcoin market is trying to settle in on the potential impact of the Coinbase public listing.

However, the market seems to be signaling a healthy retracement as seen by the bearish candle veering away from the upper band of the Donchian Channels. This is bound to be followed by an imminent push to $70,000 in the near term if the bulls maintain or increases their current stack up.

Ethereum Pushing to Break the $2,400 Resistance

Consider the ETH-USD 4-Hour chart below: 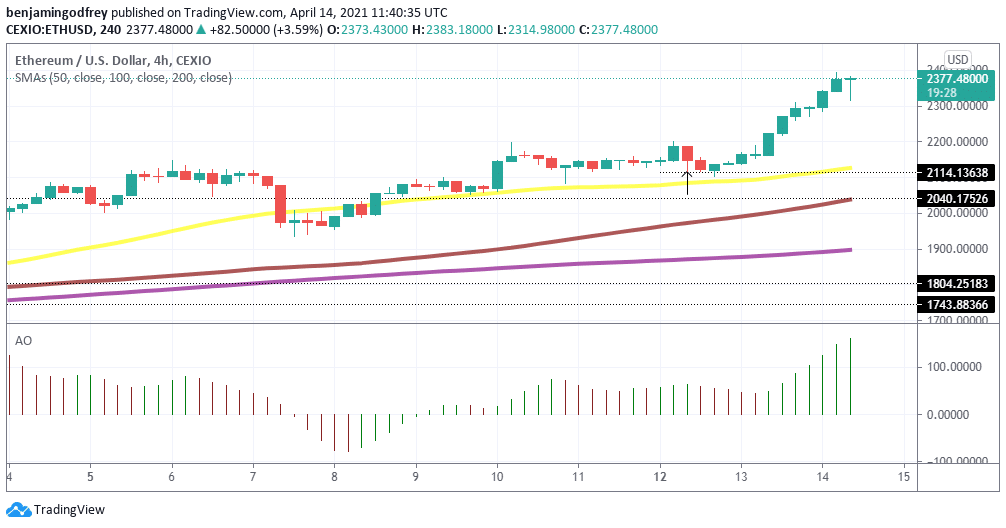 The potential to break the next resistance level is high as the Awesome Oscillator is all bullish and no bear action is visible at the time of writing. Before the bulls achieve their $2,500 short-term price target, however, intermittent and healthy retracements might be recorded.

Executive Director at CEX.IO. His area of responsibility includes customer relationships with institutional and VIP-clients, overseeing the creation of the company’s development strategy, new products, markets and partnerships. As a member of the board of directors, Konstantin is also responsible for corporate governance.

In a major development, crypto investment management and financial services provider Galaxy Digital Holdings announced the acquisition of popular and leading crypto custodian BitGo. This acquisition adds a feather to the cap of Galaxy Digital that seeks to offer a full-service platform for institutional players. Earlier we’ve already reported that there were such rumors. And […]

In a major development, crypto investment management and financial services provider Galaxy Digital Holdings announced the acquisition of popular and leading crypto custodian BitGo. This acquisition adds a feather to the cap of Galaxy Digital that seeks to offer a full-service platform for institutional players.

Earlier we’ve already reported that there were such rumors. And now they have got confirmed.

“The acquisition of BitGo establishes Galaxy Digital as a one-stop-shop for institutions and significantly accelerates our mission to institutionalize digital asset ecosystems and blockchain technology. The power of the technology, solutions, and people we will have as a result of this acquisition will unlock unique value for our clients and drive long-term growth for our combined business. We are excited to welcome Mike Belshe and the talented BitGo team to Galaxy Digital.”

The article will be updated with new information soon.

Bhushan is a FinTech enthusiast and holds a good flair in understanding financial markets. His interest in economics and finance draw his attention towards the new emerging Blockchain Technology and Cryptocurrency markets. He is continuously in a learning process and keeps himself motivated by sharing his acquired knowledge. In free time he reads thriller fictions novels and sometimes explore his culinary skills.

Dogecoin Price Jumps Ahead More Than Half a Dollar

Within the past 24 hours, we have seen Dogecoin (DOGE) jump ahead and grow over 30% in price. With DOGE climbing the crypto ladder at a rapid pace, in the early hours of Tuesday, the coin price reached a new milestone and crossed the $0.50 barrier.

The value of Dogecoin was $0.389421 and reached $0.541900 overnight–a 39% increase in price. As Dogecoin continues to grow in the crypto market, the digital currency has taken observers by surprise who have mocked and joked about coin–an intention by the creator himself. Despite the ongoing jokes, Dogecoin has had the last laugh so far, as it turns out to be one of the most profitable jokes in the crypto realm, as evidenced by the phenomenal surge in just 4 months.

Taking a quick look at how far Dogecoin has progressed since Jan 1, 2021, the coin valued at less than one cent at the time. Now, approaching May 2021, the coin has grown 10,922% and sits at just over half a dollar. However, this rapid turn of events for Dogecoin also points to the coin’s 50% price drop back in mid-April–both signaling to investors to be aware of the quick changes in the crypto market. Influencers also have the ability to alter the market as we observed earlier this year, in February. Elon Musk shared his thoughts on the crypto coin on his social media platform, which reduced almost 25% of Dogecoin’s growth within a few hours.

With Dogecoin’s current market capitalization of more than $52 billion, the cryptocurrency company has surpassed Tether (USDT), Twitter, and U.S. car manufacturer Ford. AssetDash’s data suggests that Dogecoin’s empire is an estimated $52.5 billion, which is $400 million higher than that of Tether as it is currently sitting at $52 billion. Ford’s market value is approximately $45.1 billion whereas Twitter is sitting at $43.1 billion.

There has been speculation that the coin surged because of Elon Musk’s upcoming appearance on Saturday Night Live as a guest host.

Tether Zips Past $50B and Heats Up the Crypto Market

Tether (USDT), the world’s largest stablecoin, just reached a market capitalization of $50 billion at the end of April 2021. A definitive sign that the cryptocurrency bull market is warming up, the Tether supply has grown by more than a factor of 10 over the last 12 months. Calculating the breakdown, that roughly accounts for 25% growth in the span of a month.

CTO of Tether Paolo Ardoino, has commented on this success stating, “Crossing a market cap of US$50 billion represents an incredibly important milestone for Tether.” Furthermore, he acknowledged that the success of Tether was a blueprint for a future in the banking system and as a Central Bank Digital Currency. Tether has gained recognition for its pivotal role for the future of digital currency. As the first stablecoin in the cryptocurrency industry, USDT holds a unique position as it is currently the most liquid and often used dollar-pegged token on the market. Additionally, USDT remains one of the top quoted currencies for Bitcoin and Ether trading pairs.

Last month, USDT made up approximately 66.1% of the overall stablecoin market. In comparison, the USD Coin (USDC) is the second-largest stablecoin and is worth just under $11 billion. There has been some conversation and concerns in the crypto community regarding Tether and speculation about its reserves. However, Tether was quick to put concerns to a rest and an assurance report from Cayman Islands-based Moore Cayman provided confirmation that USDT tokens are, in fact, fully backed by reserves.

Not too long ago, Tether had settled an $18.5 million fine with the Office of the New York Attorney General. Allegedly, Tether had misrepresented the degree to which the USDT coins were backed by fiat collateral. Fiat-backed currency is government-issued or government-supported currency. As such, Tether agreed to produce periodic filings, which now proves its reserve status. Thus, the assurance report comes a month after the settlement agreement.

Information provided in this correspondence is intended solely for informational purposes and is obtained from sources believed to be reliable. While all information is believed to be reliable, it is not guaranteed by us to be accurate. Individuals should assume that all information contained on this website is not trustworthy unless verified by their own independent research. Also, because events and circumstances frequently do not occur as expected, there will likely be differences between any predictions made or suggested and the actual results.

Futures, stocks and options trading involves substantial risk of loss and is not suitable for every investor. The valuation of futures, stocks, and options may fluctuate, and, as a result, clients may lose more than their original investment and possibly their entire investment. Any content on this website should not be relied upon as advice or construed as providing recommendations of any kind. It is your responsibility to confirm and decide which trades to make. Always consult a licensed investment professional before making any investment decision. Be extremely careful, investing in securities carries a high degree of risk; you may likely lose some or all of the investment.