As the volatility spikes by the day, Bitcoin’s average transaction fees have scaled to their highest since 2018, around $13.82.

Bitcoin price had continued its recovery from the weekend’s plunge on Tuesday. Notably, the asset dropped from trading its all-time high around $41k to around $30k. However, Bitcoin price at the time of writing was trading around $35k according to metrics provided by CoinMarketCap.

Having jumped around 4% in the past 24-hours, most analysts infer that the Bitcoin price drop was a healthy market correction. Particularly due to the fact that the asset has formed a new support level for future reference in case the market prices were to plummet. Others argue that most bitcoin units are now under long-term investors’ control after buying the dip.

Bitcoin’s volatility has spiked in the recent past as more retail and institutional investors flocked to the market. Market data provided by CoinGecko indicates the asset is up over 86% in the past 30 days. Besides, the asset has climbed approximately 29.5% and 11.4% in the past fourteen days and seven days respectively.

As the volatility spikes by the day, Bitcoin’s average transaction fees have scaled to their highest since 2018, around $13.82. Meanwhile, Bitcoin’s hash rate is at its all-time high around 159.162 Ehash/s according to Bitinfocharts.com.

Is It a Recovery of Bitcoin Price?

As Bitcoin price rallies further from its 2017/2018 all-time high, global investors and regulators are coming in to throw their market perspective. One notable investor is billionaire Mark Cuban who tweeted that the current crypto rally is similar to the internet stock bubble of the 1990s.

However, he further highlighted that Bitcoin, Ethereum, and a few other crypto projects will thrive past the bubble but most will fail.

Watching the cryptos trade, it’s EXACTLY like the internet stock bubble. EXACTLY. I think btc, eth , a few others will be analogous to those that were built during the dot-com era, survived the bubble bursting and thrived, like AMZN, EBay, and Priceline. Many won’t

On the other side, the UK’s Financial Conduct Authority warned crypto investors that they could lose all their money in the crypto industry. “Significant price volatility in crypto assets, combined with the inherent difficulties of valuing crypto assets reliably, places consumers at a high risk of losses,” the regulator noted.

A financial analyst who sees positive income in both directions of the market (bulls & bears). Bitcoin is my crypto safe haven, free from government conspiracies.
Mythology is my mystery!
“You cannot enslave a mind that knows itself. That values itself. That understands itself.”

General Electric (GE) Stock vs Bitcoin: What Is to Invest?

Ripple Faces Another Lawsuit in Florida

Ripple has already faced a similar case filed against it by the SEC, which alleges that the XRP token is a security and not a crypto asset.

Ripple Labs is facing another imminent lawsuit as the crypto firm has been sued by Tyler Toomey, an XRP investor based in Florida.

According to this new lawsuit, Toomey alleges that the payment protocol company broke laws guiding securities in Florida with its failure to properly register with the financial authorities of the state and selling its XRP token to retail investors without any form of restriction.

The lawsuit filed in Florida accuses Ripple Lab of generating funds through its token sales to cover its operational cost. It was able to achieve this by selling the assets to various retail investors while also controlling its supply and liquidity.

Toomey acknowledges the fact that the crypto company was already facing a similar case filed against it by the Securities and Exchange Commission of the United States (SEC), which alleges that the XRP token is a security and not a crypto asset. However, he goes a step further when he says Ripple knew that the token was a security but deliberately chose to mislead investors that it was not.

Brad Garlinghouse, the CEO of Ripple, is an individual defendant in the law case. Garlinghouse was said to have sold almost $150 million worth of XRP between 2017 and 2019 and also lured more investors to the asset through different interviews he granted where he hyped up the token and predicted that its market cap could reach “trillions of dollars.”

The plaintiff lost over half of his investment in the XRP tokens between when he purchased them on Nov. 24, 2020, and his sale on December 7 and December 28, 2020.

Ripple and Its Lawsuits

Tyler Toomey lawsuit is not the only impending lawsuit that Ripple is facing. The crypto firm is also facing a class-action lawsuit that was filed against it by Bradley Sostack in 2018. At the same time, the firm is preparing to face the SEC lawsuit that is set for pre-trial by February.

Tetragon, a leading asset manager, has also filed a lawsuit against the crypto firm as it is looking to redeem its equity in Ripple. The asset manager had led a funding round in December 2019.

Due to the lawsuit filed by the SEC, the price of the XRP token tanked and major crypto exchanges like BitStamp and Coinbase have delisted the asset from their platform.

You will recall that Coinspeaker reported that XRP is believed to be controlled by Ripple because it had 100 billion units pre-mined unlike other crypto assets like Bitcoin.

Oluwapelumi is a believer in the transformative power Bitcoin and Blockchain industry holds. He is interested in sharing knowledge and ideas. When he is not writing, he is looking to meet new people and trying out new things.

The CEO of Ark Investment Management Cathie Wood has said that financial regulators in the United States will not assent to a Bitcoin exchange-traded fund unless the overall market capitalization of the crypto industry hits $2 trillion. This was made known in an ETF Trends Big Ideas event.

According to Wood, she doubts if the US Securities and Exchange Commission (SEC) would feel comfortable with the leading crypto asset unless the “flood of demand” for Bitcoin is satisfied. She noted that the crypto industry currently has a market cap of $1 trillion, this has to double before the authorities can accept a Bitcoin ETF. Currently, Bitcoin has a market cap of over $600 million which is bigger than the market cap of financial institutions like MasterCard and Visa.

During her presentation, she predicted that Bitcoin price could continue to rise especially if the current institutional adoption of the asset should continue. The Ark CEO cited MicroStrategy’s Bitcoin-first treasury policy and said if other top companies were to put only 1% of their assets in Bitcoin, then the value of the asset could rise by up to $40,000. Microstrategy’s CEO Michael Saylor has remained bullish about the crypto industry and has maintained his insistence on allocating his company’s assets into the crypto coin.

She furthered this view by saying if these institutions were to allocate between 2.5% and 6.5% of their assets to BTC, then we can expect the asset value to be as high as $500,000.

Wood also went on to praise the head of SEC Gary Gensler newly nominated by President Biden. She said that the digital currency professor is “very pro Bitcoin” which is very good news for the crypto industry generally.

Gensler who made his name during his stint as the Chairman of the Commodity Futures Trading Commission (CFTC) previously is well renowned for his knowledge and positive disposition towards decentralization and digitization of finance. He labels himself to be “a little bit center minimalist on Bitcoin.” While he is more pro blockchain technologies and smart contracts.

In an earlier interview with Yahoo Finance, the Ark CEO, has said that many large companies have been asking for her opinion about the possibility of investing in Bitcoin as an hedge against inflation. She added that we could see the entrance of more tech companies who are more comfortable with the technology putting their funds into the crypto industry.

Oluwapelumi is a believer in the transformative power Bitcoin and Blockchain industry holds. He is interested in sharing knowledge and ideas. When he is not writing, he is looking to meet new people and trying out new things.

Despite Growth on Other Blockchains, DeFi Is Still Ethereum’s Forte

As the race for decentralized finance (DeFi) supremacy heats up, Ethereum is still leaps and bounds ahead of the pack, and it doesn’t look like that’s about to change any time soon. In the last few months, a wide variety of other blockchains have seen DeFi development activity skyrocket, with platforms like TRON, Cardano, EOS, Algorand, KAVA, and several others seeing a surge in the number of DeFi-related apps launched.

But as of yet, none have managed to come close to Ethereum’s success – despite many claiming to offer advantages over the platform, such as lower fees, better scalability, or better development tools.

Here we take a look at an often-overlooked reason why this may be.

DeFi Is About Community

Although several next-generation blockchains have appeared in recent years, many of which offer impressive scalability, speed, interoperability, and more. None have managed to overtake Ethereum as a hub for decentralized finance.

This is because DeFi is as much about new, exciting technologies and opportunities as it is about community. Though it is true that Ethereum sometimes suffers from high fees and delays during peak times, it also has by far the largest community in the cryptocurrency scene (barring Bitcoin).

Over the past six years, Ethereum has been gradually growing its community, including fervent developers, node operators, and general enthusiasts, giving it a solid foundation for the rapid uptake of new, innovative protocols and tools. 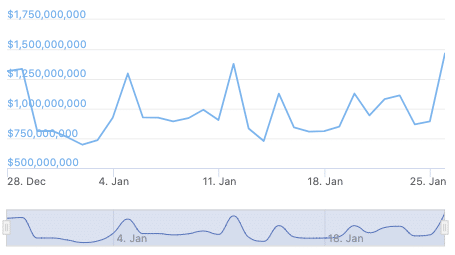 Uniswap trading volume exceeds that of all other DeFi apps (on other blockchains) combined. Photo: Coingecko

Uniswap trading volume exceeds that of all other DeFi apps (on other blockchains) combined.

This not only means DeFi apps on Ethereum have a drastically higher chance of success than those on competing blockchains, but they also have a better chance of receiving investment, generating community code contributions, and earning recognition – since there is always a legion of vocal, passionate community members to draw from.

If DeFi was a race, then Ethereum is inches from the finish line.

Other projects that have already built a strong community likely have some understanding that this community is an essential part of their success. This is why many of them build on Ethereum.

Take NewsCrypto as an example. As a community-centric platform for analyzing crypto markets and improving trading performance, NewsCrypto has managed to develop a substantial community of its own.

We are curious to see what a $1B volume a day market can do for NWC!

Despite originally launching the NewsCrypto Coin (NWC) token on the Stellar blockchain, it recently launched it on the Ethereum blockchain as an ERC-20 token. This allowed it to list to token on Uniswap, opening the doors to DeFi to its hundreds of thousands of users – something that could not be done on Stellar.

With that said, Polkadot stands out as one of Ethereum’s biggest potential rivals. Though the platform is still arguably in its early days of development and only launched its mainnet recently (mid-2020), the number of upcoming DeFi launches on the platform number in the hundreds.

Not only this, but it also has a staggering community behind it, which may help it succeed where other platforms have failed.

But for now, it remains Ethereum vs everyone else.

Having obtained a diploma in Intercultural Communication, Julia continued her studies taking a Master’s degree in Economics and Management. Becoming captured by innovative technologies, Julia turned passionate about exploring emerging techs believing in their ability to transform all spheres of our life.